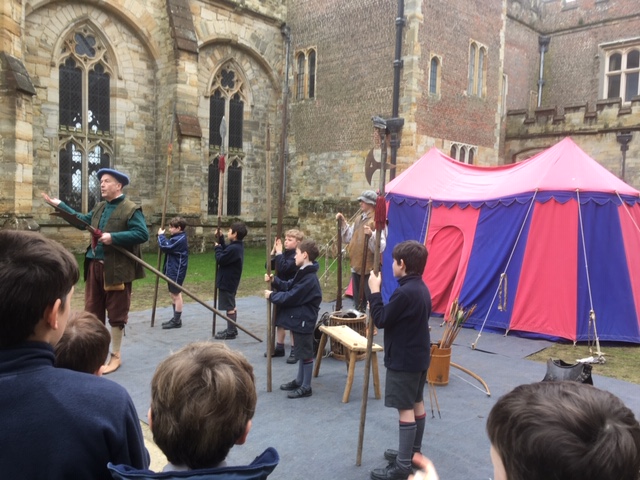 Dehong (4RT):
Today we went to Penshurst Place for a school trip.
First we went to a musical show. A man played lots of weird instruments. There was one which looked like a guitar with nine strings.
Next we went to the barber surgeon. Their job us to cut hair, cut off broken arms of the soldiers, get bullets out of people and help if you had a headache or cold. After that we went to the room where Queen Elizabeth the first was. She had red hair and a velvety purple dress. She was very strict and called her maid ‘the monster’. Then we met the maid. She kept all of the queen’ clothes. Afterwards, we went to the witches’ hideout.  Then we went to the soldiers’ tent. They showed us a lot of different weapons used for combat and I got to hold one. Finally we went to see the spit boy and kitchen maid. She talked about what spices the poor could eat and what spices the rich could eat. Some things the people in Tudor times didn’t drink were very weird. They didn’t drink water and milk!
My favourite bit was the music because I love listening and playing music. 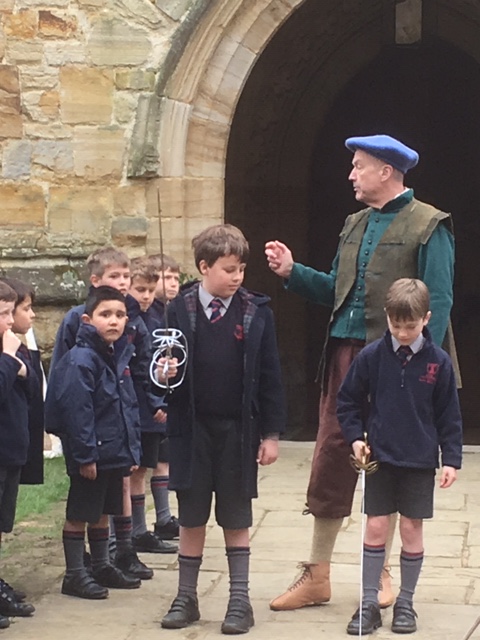 Arnav (4GH):
Year 4 are currently learning about The Tubers in history and as part of this topic we went on a trip to Penshurst Place. We were told that on the trip we would see actors dressed as Tudors.
On the bus I sat next to William and we were excited about our school trip. On the journey we played with the Rubik Cube and had lots of fun. We were greeted by a drummer and marching men with spears, we then went on to see a man playing an old musical instrument around fire. I was really amused watching him play. After that we went to the barber surgeon. and he showed us how they would get rid of a head ache and he showed us that they used to cure leg or arm pain…  by chopping that part off!!  We then got to meet ‘Elizabeth I’ who was dressed in a Tudor costume, she asked us some questions. The men who had been marching then showed us the different weapons they used in those times. Now we ended with the best area…the food! We learnt how venison used to be eaten and how everyone, even the children, 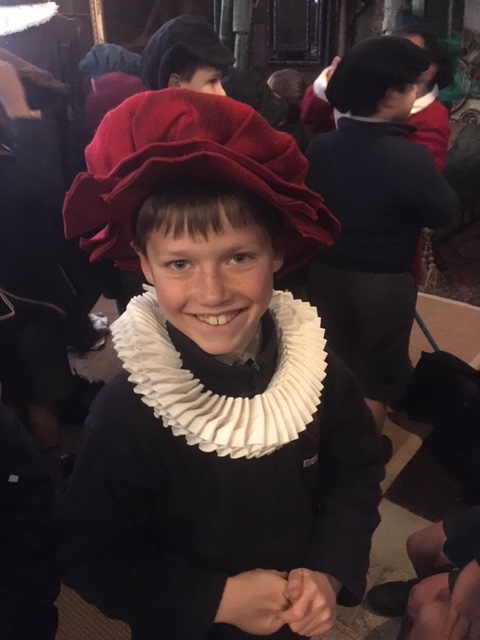 would drink beer and not water. We then had our lunch and headed home.
Henry (4CM):
On Wednesday 20 March we went to Penshurst Place. When we arrived the first thing that we did was to listen to a Tudor musician. He played many types of music but my favourite was the bag pipes. After this we went to the Tudor barber.  He told us that he was not only a barber but also a surgeon and a dentist! He then showed us what he would do if people were hurt or had a sore throat. My favourite part, was when we went to see a lady who was accused of witchcraft. We then got put into the stocks for robbery and kept there for two minutes. Another boy got ‘beheaded’ for treason. Then we visited the kitchen where we saw a Tudor maid who cooked the food, set the table and made sure that the kitchen was kept clean. I found it really interesting when she told us that carrots were originally black. Finally, we went to see the Tudor soldiers and they showed us the weapons that were used. I learned that the crossbow was a Spanish weapon. After all of our activities we went to a room at the top of the tower where we sat down with our friends and had lunch. Lastly we went to the playground which was great fun but we didn’t have long in the playground because after what seemed like no time at all we had to go back to school.

American Jazz Concert at The Barbican

Max C writes:   On Thursday evening we (a group of Y6 and Y7 Choristers from the Chapel Choir) joined...

Quarter Plus Winners for Pre Prep and Junior School

Sarah Brownsdon has been appointed as the next Head of The New Beacon Prep School, with effect from April 2023....