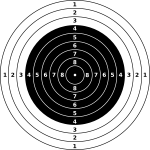 On Monday 20th May 2019 the New Beacon 1st IV travelled away to St Andrew’s Prep (Eastbourne) to compete in the third and final shoulder to shoulder triangular school match of the year against St Andrews and Holmewood House.

Travelling to use a now more familiar indoor range helped as 3 of the boys had previously competed 6 months ago in a 1st VIII format. The routine of formal shoulder to shoulder competition was now nothing new for our boys and we cut down on rookie mistakes and shot a lot better turning in our highest competition score to date.

The competition the NB boys faced was still some way beyond our current ‘unsupported’ standards and there were some excellent performances on the day with some very high and consistent scores from both Holmewood House & St Andrew’s Prep.

The competition ended as a tie between Holmewood House and St Andrew’s Prep who closed up the gap from last term. However as St Andrew’s Prep did not beat Holmewood House outright the Cup was retained by Holmewood House who will also be hosting the return Fixture on Monday 11th November 2019. As both of our competitors will be losing their entire current shooting line ups in the next academic year we are working with our development shots to ensure we start the 2019-20 year running.

All four boys in the 1st IV were a credit to themselves with the whole team shooting their personal bests for ‘Unsupported Shooting’ (using a sling as opposed to resting the rifle). All team members thought they could have done a little bit better which shows just how high their personal standards are and how dedicated they are to doing their best for the team.

The continued improvement in our team score from the last outing was again noted by the opposition coaching staff and both schools know that New Beacon are on the way up to challenge the comfortable duopoly at the top.

So we continue the trajectory to becoming a competitive unsupported team and have set an objective not to come last next year.

We’re thrilled and honoured to be one of this year’s winners at the Kent Mental Health & Wellbeing Awards.  We...

On Tuesday, 21st September, your son/s and daughter/s (Nursery) will be sitting for their annual individual and sibling photographs. Boys must...

LCM Drama lessons will commence on Tuesday, 21st September. These sessions will be held in room 26. Please see the LCM...

Two @KentCricket batsmen both formerly of the same school @thenewbeacon in action at the same time at either end. Rare? https://t.co/dAzAxCd1ix

Delighted and honoured @thenewbeacon to be one of this year's winners amongst an impressive list of #kent #wellbeing awards and all those who do such good work in the local community. Thank you. @WestKentMind @iapsuk @ISC_schools @kentlivenews @bbcsoutheast @7oaksSports https://t.co/2ftP64x5AB