Here are some photos and videos of boys competing during the first ever New Beacon Virtual sports day! This was done via Zoom and Mr Young was in charge of the event, ably assisted by Mr Braidwood who did a fine job commentating throughout. Boys from Reception and Year 1 took part in 7 events which they all did at home via a video link!

There was some extremely positive feedback from parents and the boys who took part. Even parents and siblings were getting involved. Mr Young, Mr Braidwood, Mrs Alteirac, Mrs Flynn and Mrs Hunter would like to say a big thank you to the parents, siblings and most of all to the pupils for making this such a success!

Thanks also to Mr Young for creating a super fun event.  You can see some of the photos from Charlie B 1SH, Daniel R 1JF and Harry C in Reception below and you can watch Milo 1SH really getting stuck in here. 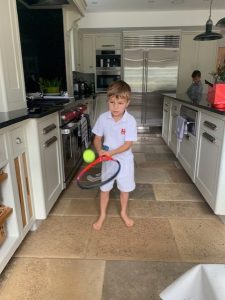