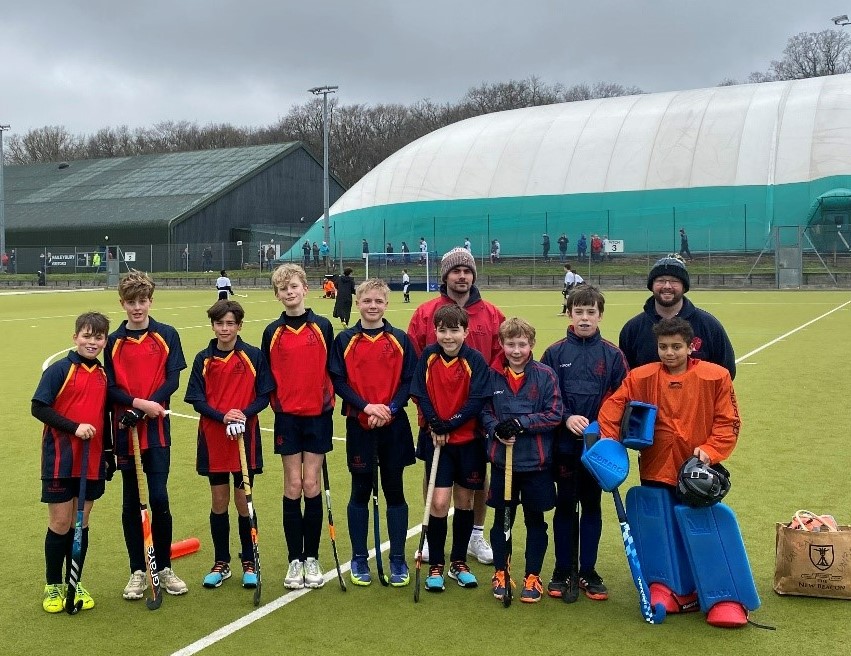 It was an early start, leaving school at 7am in order to tackle the M25 and Dartford crossing. Upon our arrival, the boys managed to get the feel of the pitches and shake off a few pre-game nerves. We started the tournament against Gresham Prep, which ended in a 0-0 draw. The boys had now managed to shake off their first game nerves and were playing well together.

Our next match was against Taunton School (now National Champions). Again, it ended in a 0-0 draw with some promising play up front from Miles Parker and a stand out performance from Aidan O’Halloran in goal.

At the start of our next game, all of the teams in our group had drawn against each other and we knew that a win would see us sitting top of the table. With a slight tactical change, the boys now had the bit between their teeth and started playing their best hockey of the season. The defensive line of Joshua and Ethan was solid, cutting out the opposition’s advances and allowing the midfield to make some great counter attacking plays, really putting the pressure on the opposition. Luke opened the scoring with a lovely goal from a set play. However, the elation did not last long with Monkton breaking quickly and levelling the score. They boys rallied and had all the pressure in the final parts of the game, winning a short corner in the dying moments. This was our last chance to get the win. With parents and coaches watching through the gaps between their fingers, the first short corner was taken, hitting an opposition foot on the way into the goal. We would have one last chance at taking the short corner before the game was over. It was now down to Sebastian to deliver the ball swiftly, Christo to trap the ball neatly and our Captain, Ignacio M, to hit the backboard. The ball came in from Sebastian, Christo made a good stop and……… ‘thud’ the sweet sound of the ball hitting the backboard. Without hesitation, Ignacio fired the home! We had finally won a game in emphatic fashion.

Our final group game came round quickly and the opposition, Ardingly, had a point to prove. A draw or win would see us through to the cup competition. The boys were determined and put the opposition under vast amounts of pressure. In what can only be described as ‘goal of the tournament,’ Sebastiaan fired the ball into the net, on the volley. The watching crowd gasped in amazement and a rousing cheer followed.  Even the umpires were in awe and, as the game ended, they commented on the sublime finish.

That was it, we had qualified top of the group at the nationals, something never achieved before by a New Beacon Hockey team! The cup games awaited and we knew the competition would be tough.

In the quarter-finals, we faced Bedford Prep school. The boys had excelled thus far and stepped onto the pitch in good spirits. It was a close game but Bedford managed to score after a short corner routine and you could tell that fatigue was setting in. After a few attacking moves of our own, we were caught on the counter and Bedford netted a second. The boys battled to the end, almost managing to pull one back but it was not to be, and the game ended 2-0.

It was an absolute pleasure coaching the boys, who have now cemented themselves as one of the top prep school hockey teams in the country and the most successful team ever fielded by The New Beacon, finishing joint fifth nationally. It was certainly a memorable day and a proud moment for all those involved, especially the boys.